Banashankari Temple located near Hubli, precisely in the Amargol town in Dharwad district, is one of the oldest and the most famous temples here. It was constructed in the 13th century and thus exhibits the northern influence just like many other edifices built here during that time. The Nagra style is well incorporated in it. 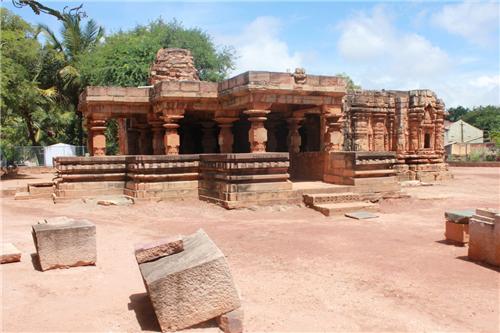 As per the Skanda Purana, when Durgamasura, a powerful demon began tormenting the people on earth, Goddess Parvati was urged to intervene and relieve them of his cruelty. She then came to the earth and destroyed the wicked demon thereby restoring peace and harmony. She was given the name Vana Shankari, meaning Goddess of the forest and eventually came to be known as Banashankari. She is also addressed by various other names such as Shakambhari, Banadavva, Vanadurg, Sunkavva, Balavva, Shiravanthi and Chowdamma Banashankari.

Banashankari Temple in Hubli boasts of a marvelous architecture; it is a good example of the Calukyan architecture. The temple encompasses several pillars that have beautiful carvings of Lord Narasimha, Vishnu, Brahma, Shiva, Ganapati, Parvati and various other Gods and Goddesses. The carving of the structure is done with utmost precision and looks spectacular. It is being protected under the Ancient Monuments and Archaeological Sites and Remains Act, 1958. The temple has managed to withstand several adverse climatic conditions over the centuries and still appears fascinating. However, unfortunately a portion of this pious edifice collapsed a few years back and the issue was neglected by the government however the restoration work has now started and the temple would soon be reinstated.

Nevertheless, it looks magnificent and its beauty augments further during festivals such as Navratri and Diwali when it is illuminated with different colorful lights, diyas and candles. The idols of Goddess Banashankari as well as the other Gods in the temple are decked with beautiful clothes and jewelry on such occasions and the place is decorated beautifully with flowers and lanterns. A large number of people visit the temple during these festivals to get a glimpse of the Goddess and offer prayers.

The temple, located near the famous Unkal Lake, is well connected with Hubli as well as other parts of the country via road. There are several accommodation options for those visiting from far off places. A number of hotels are located near the temple. Clarks Inn is the nearest to this place. It is located at a distance of just 2.1 km from the temple. Hotel Naveen and Hotel Metropolis are also situated near by. All these hotels offer a comfortable stay to the guests.